Crane Bling: the Long, the Short, and the Telescoping

From The Yacht Report. Download the PDF version here.

Custom and serried concepts creep even into that most custom of objects, the crane. Rick Thomas of Nautical Structures details here two crane-building case histories. One was for a recent 98-metre NW European built motoryacht and was of deeply custom complexity with a bling finish. The other was for two much smaller sailing vessels, but 12,000nm round-the-world at Alloy Yachts. This latter proved so functional that the configuration has become a standard fit (in effect one of a series) for other sailing yacht builds.

WE WERE CONTRACTED TO DESIGN, ENGINEER AND BUILD a series of very custom cranes for a recent 98-metre build in Germany. The most challenging of those were two pairs of two 4,500kg/10,000lb capacity overhead beam cranes providing a total hoisting capacity of 9,000kg/20,000lb per side. Due to the unique and spectacular naval architecture of this build, these large-capacity cranes are installed in the overhead of the vessel’s full-beam beach club, below the main deck.

To enhance the utility of the beach club space, the large shell-doors are designed to fold-down to open, and are covered with the same teak surfaces as the rest of the sole in the beach club. Once open the tenders may be deployed from this space and a very large, opulent lounging and entertainment area is available to owner and guests. This naval architectural feature added significantly to the cranes’ complexity. Because the shell-doors open down instead of up, the tender has to move 7.6 metres outboard to pass over and clear the door when launching. The cranes stow in a space only 4.3 metres long and so telescope outboard in three sections.

Built entirely from stainless-steel plate these massive cranes weigh 8 tonnes each! These cranes are synchronised together to ensure that there is no unequal stresses on the launching of the tender. The cranes are also built with Linear Winch Technology: a specialised non-fouling and load-limiting hydraulic winch system using composite fi bre line developed and perfected in house. In the design of these cranes the stern beam is configured with two synchronised falls. Three falls in total aid the stability of the tender on launch and retrieval. All hooks and weights self-stow after use. The crane operator has control over the trim of the tender, and may hoist the tender with a slight bow-up configuration if desired. The crane is controlled by a wireless proportional control system. The wireless has an optional wander lead that may be used in the event that the wireless signal is compromised. A manual control system is also installed to back up the electronic control system. 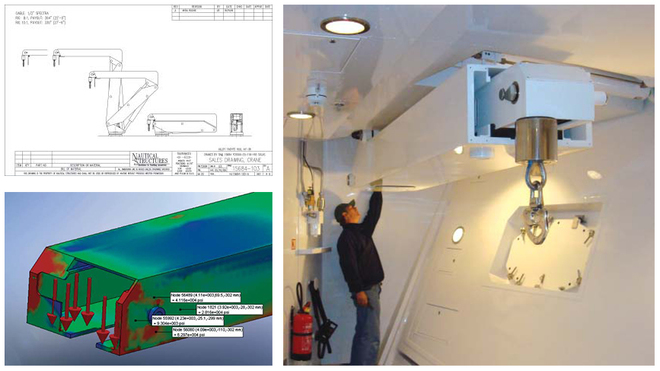 These cranes are constructed from Lloyd’s Register certified 316-L stainless-steel plate. Because these cranes are located in a highly finished public area of the yacht rather than a more typical machinery space, the final finish and detailing of these cranes had to be addressed in an unusual way: 50mm-thick plate finished as a piece of jewellery. These cranes were built under LR survey to LAME (Code for Lifting Appliances in the Marine Environment), and delivered with Cargo Gear certificates.

Since the tenders were to be removed to turn the tender garage space into a beach club, provisions had to be made to moor the tenders alongside. We designed and engineered two pairs: one pair for the port-side and one pair for the starboard-side. We built two boat-booms; one for each side of the yacht.

These boat booms were designed to support a 9-tonne tender in calm-harbor conditions; Sea-State One. Due to the size of the tenders and distance of travel, deploying from a highly finished tender garage it was agreed that the tenders are to be launched in only calm waters. This is in contrast to the 3-tonne capacity SOLAS cranes we supplied and installed in the forward tender-garage. The SOLAS MOB/Rescue Boat Launching Cranes are designed and certified to operate in sea conditions of Sea State Eight (see above image).

The boat booms telescope 3 metres from the side of the yacht from LR approved watertight housings. Into the final section of the boat boom we installed a specialised hydraulic linear winch system that provided a fairlead to the tender. The hydraulic circuit prevents the booms from being retracted into the yacht while the line is out of the boom. These booms are manufactured from 316-L stainless steel, and like the cranes, are mirror-polished. 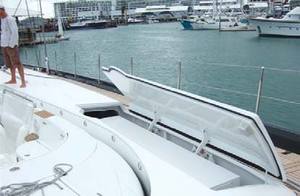 We also developed a specialised folding crane system for two 51.7- metre Dubois designed Alloy Yacht builds. The folding crane was designed to integrate into the deck-lockers adjacent to the tenderwell in the forepeak of both Red Dragon and Mondango. When stowed the crane is concealed under a hatch. The tender lives in a tender-well that converts to a Jacuzzi when it’s removed. This is like the 98-metre project, reflecting a design trend to allow yacht owners to utilise the valuable space taken up by tender-storage. The crane is MCA-LY2 compliant as is the Rescue Boat Launching Crane, and provides a 2,500kg/5,500lb safe working load capacity. It folds in three sections into a compact space of only 2.9m x 60cm x 92cm (118” x 23” x 36”), and has a total reach of 4.2m/14ft. It is quite capable of being fully loaded in any boom-position providing the vessel with a generous service area. 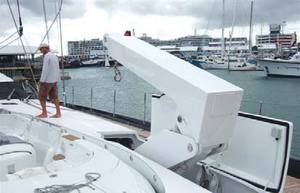 This crane also uses our proprietary Linear Winch Technology. Here though there is a unique embellishment to the winch; a load-release free-fall function. From the wireless crane control the operator can release the tender into a controlled drop of up to 0.8m/second (160ft/minute). The free-fall brake will arrest the fall in less than 50mm, providing the operator ultimate control and safety when launching. This feature allows full compliance to the MCA LY- 2 five-minute launch requirement. This is quite demanding as those five minutes include the opening of the crane-cover, full crane deployment and of course launching the tender. LY-2 code demands that the hydraulic valving is split into two locations, with one set of valves located outside of the crane enclosure. This allows the crane operator to use it manually should the wireless controls not be operative. 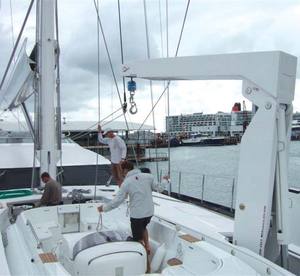 The Folding Crane is constructed primarily from 5086-H116 aluminium alloy, for both consideration of weight and as an appropriate material for a foredeck crane. It is fully faired then finished in Awlgrip. Testing of the crane is done at the specialised test bed of our Key Largo, Florida factory. This tests both dynamic and static loads. During testing a static load of 5,500kg/12,000lb was applied (LSA Code 6.1.1.5); some 2.2 times the SWL capacity. The test-bed may also be inclined up to 25 degrees inclination to emulate a vessel listing at 20 degrees with a 10-degree trim. Since the development of this specialised crane system, similar configurations of the folding crane system have been sold to several other well-known shipyards.